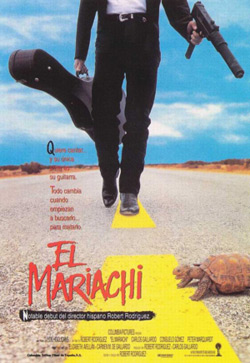 El Mariachi just wants to play his guitar and carry on the family tradition. Unfortunately, the town he tries to find work in has another visitor...a killer who carries his guns in a guitar case. The drug lord and his henchmen mistake El Mariachi for the killer, Azul, and chase him around town trying to kill him and get his guitar case. 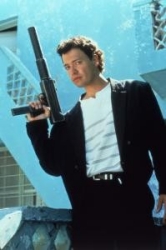 Through the heart of independent cinema comes the bold and expressive first film by Robert Rodriguez. While he would go on later to give us some modern day classics, this is the film that jump-started his career. Set in a gritty town of Mexico, a drifter arrives ready to restart a new life and concentrate on his music. He soon learns that this will be a very difficult dream since the moment he steps foot in town he is mistaken for a murderous criminal named Azul. Azul is after his money that Moco (the head boss) has failed to pay him. Moco tries to have Azul killed, but finds it difficult when he carries with him a guitar case filled with guns. After several gun battles, explosions, and a love story with a woman that gives the guitar player his first real gig, our hero finds his life in the mercy of others. It is at this time our Mariachi is reborn.

Rodriguez gives his best direction to date. Perhaps it was the lack of funds or the intensely gritty scenes, but this film helped me realize why cinema is so amazing. It is the perfect story of the small fish making his big mark on a big pond. Rodriguez takes every resource he can and rebuilds the classic concept of mistaken identity. With the fast-framed photography and interesting choice of camera angles, he takes a straightforward story and builds a legend. I enjoyed watching this film because although it was made for just a simple $7,000, the production doesn't look cheap. I have seen Hollywood blockbusters that have looked like they squandered their money more than Rodriguez did. I was just impressed with the quality of the film and the story that I suddenly felt myself totally immersed into the story.

Oddly, it is the story that never falters throughout this picture. Normally, when you have a lower cost on budget, a segment of a film will suffer. Sometimes it is the character development, other times it is the story. Nothing is forgotten about in this film. There is plenty of violence (for all you action fans out there), some powerful drama (dealing with his dreams), and some comedy that will keep you grinning from ear to ear. By having this strong balance, our hero emerges with the utmost confidence, our villain seems diabolically evil, and therefore leading into moments of sheer joy, constantly wondering what will happen next. I was rooting for everyone in this film because I felt something for each. Only through the careful eye and artistic direction of Rodriguez could such a feat be accomplished.

I have nothing negative to say about this film. From the moment the first turtle walked across the screen until the very end, I enjoyed every aspect of this picture. I suggest this movie to anyone that has ever thought about making a film, but was concerned about budget. I also suggest this film to anyone who loves a good story, amazing action, and characters that literally jump out of the screen like comic book heroes.