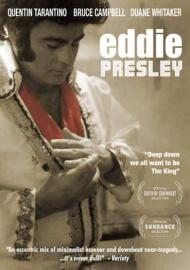 Eddie (Duane Whitaker) is a broke, desperate and stranded former Elvis impersonator, trying to cut it only a stones throw away from Hollywood Boulevard. He gets suspended from a shit job as a security guard while he's making plans for him and his girlfriend, who works an even tougher shift as a waitress in a diner. Day by day he checks his voicemail from a public phone close to where he parks his minivan, which is also his home. His only friends are some of his colleagues, one of whom has a crush on him. An old friend who runs a beaten-down club finally calls him up one day and gets him a gig. He scrapes all his money together to print a few flyer ads, and his friends order a limousine to get him to the club. It's the moment he has been waiting on for so long. He's nervous, shaky and sweaty. The club is practically empty and after an underwhelming first song, the sound system eats his background tape and he starts to improvise, but then veers off into a personal story about his life. This is where we get to know Eddie "up close and personal" and find out that he was once a successful businessman running a few pizza places, but gave it up for a career as an impersonator with a band, which cost him his marriage and his money. He had a nervous breakdown years ago and ended up in a mental institution which wrecked him. So now he's trying to stay afloat. Is this his breakthrough? Eddie is a man who follows his heart, a dreamer, a nice guy in a tough world, surrounded by struggling people trying to get the hell out.

Eddie Presley is a very personal film, starting from the first minute. Originating from a stage play by Whitaker. It is less about Eddie the Elvis impersonator, more about the story of a man who didn't make it back up after he fell down. Eddie is a guy who fell in the water when he was trying to reach for the ladder, but he doesn't give up. The film lacks real commercial value, and the condition of the print that was used for the DVD tells a story, but behind the seemingly low-budget underground facade you meet a film with a real heart, and not because the DVD liner notes tell you that. It's actually the film's real strength. I found myself caring for Eddie, biting my nails wanting to find out what happens, being all anxious for his first gig in god knows how many years. It's a small film with a big heart, with some great moments, holding a mirror to 90s Hollywood's back-alleys. Don't watch this because you know Quentin Tarantino has a cameo appearance, because if you blink, you might even miss it. Watch it to find out more about Duane Whitaker, watch it if you can look past the "this looks cheap" first impression and try to see a little film that's about people. I enjoyed it for what it is. Or you can enjoy it for a priceless Tierney cameo.

The DVD I watched is the one released in the UK by Odeon Pictures, and should be fairly identical with the regular edition released in the US, where you can also get a Special Edition with even more extras. Here you get a few deleted scenes (about half an hour of footage) and outtakes from the mental institution part of the film, a tribute to Lawrence Tierney (which is an interview circling around how it is working with Tierney, with a little side reference to Reservoir Dogs) and as well as a trailer and some interviews. The picture and audio quality of the DVD are VHS level, especially with the video, but it's good enough to enjoy the film. Basically, the DVD offers a nice set of extras and lets you watch the film and find out more about it, and they put some effort into the DVD menu intros, too.

There's one thing to say about the extras that Tarantino fans should note. The film itself offers barely nothing of the cameo both of Quentin or of Bruce Campbell. Most of that ended up on the cutting room floor, so the outtakes are worth watching in that respect. Below is a picture of an angry Mr Tarantino playing the Hospital Orderly, a cameo that is notorious, but really only for what's not shown in the movie, especially regarding speaking parts. Funny how even today Q likes wearing scrubs every now and then.

Ladies and gentlemen, Eddie Presley has left the building. 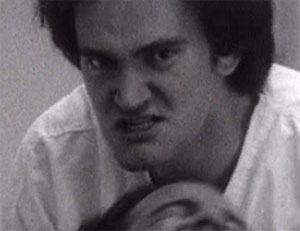