DOUBLE DARE is a double-barreled, action-packed documentary about two Hollywood stuntwomen, Jeannie Epper and Zoe Bell. Jeannie, who refuses to retire at sixty-four, doubled for Wonder Woman in the 70's, and Zoe landed the coveted job of doubling for Xena at the age of eighteen. Amanda Micheli's award-winning film is a bittersweet look at two dedicated women in male-dominated Tinseltown as they struggle to stay working, stay thin, and stay sane.

The cult documentary about the world of stunt doubles, takes the viewer on to a journey into the formerly secret world of female stunt doubles. Also appearing, Quentin Tarantino, since even Uma Thurman's stunt double in Kill Bill is one of the "stars" of Double Dare. A must own for every interested fan. 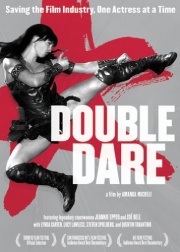