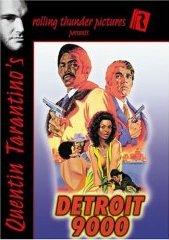 "The only thing more suspenseful than the first 91 minutes, is the last 15" - Aaron from Winnipeg/Canada

Quentin Tarantino's Rolling Thunder Releasing has done it again. I really admire how Tarantino uses his clout to give a second chance to movies that never really had a first chance, whether it's great imports like "Sonatine" (1993) or "Chungking Express" (1994), or old B-movies like "Switchblade Sisters" (1975) or "The Beyond" (1981). His latest "Detroit 9000", is a blaxploitation classic that no doubt influenced Tarantino in some of his own work. - Combustible Celluloid