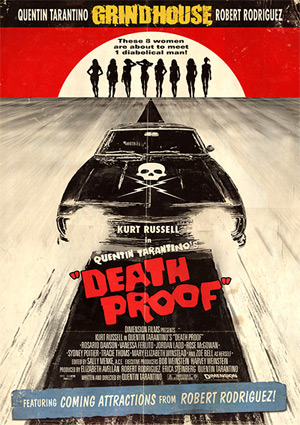 A review of Death Proof

It is a sunny and warm saturday evening in beautiful Basel, Switzerland. The bars are filled with young folk sitting out on the streets, there's the smell of food in the air, music and happiness. A summer weekend's atmosphere at its best. And what am I doing, I am taking my cousin to see Death Proof. Now why would I want to watch Death Proof again, after having seen Grindhouse five times? Let's find out.

Death Proof, in its non-Grindhouse version which is a good 20 or so minutes longer, is a joy to watch. While it already took quite a while to gain speed in the Grindhouse version, this time it takes even more time to get to the action, but as with good sex, the longer the foreplay, the.... you get the idea. Tarantino takes his time establishing his characters, and where the cropped and concise Grindhouse version left out tiny bits here and there, Death Proof proper gives the characters even more time to develop. It shows an even more human Stuntman Mike, it spends more time on all the girls and it makes you feel a lot more attached to each and everyone of them. Why is that important? Death Proof is by itself actually consisting of two parts. The first half is how Tarantino establishes the deadly menace that is Stuntman Mike. He introduces a group of lovely ladies who have nothing on their minds and just want to spend a wild evening at the bars. Enter Stuntman Mike who will put an end to their lives with the snap of a finger. Shock horror. The audience is puzzled. Half way into a movie, the director kills all the stars, and that after you've hung out with them, had Chartreuse shots and watched a lapdance, smoked pot outside on the patio and tried to get them drunk to go to the lakehouse with them! The second half, we already know, what will happen. There's no more need to insinuate the menace, the menace is there. This time, the girls don't know it yet, they don't even have a weird feeling like Arlene when she sees the car in the parking lot. This time, once again, the audience gets to hang out with a posse of foxy ladies out to have some fun test driving a car in the middle of Tennessee. Not highly spectacular, the audience would thing, we already know they're going to die just like the others have. Surprise surprise, this time, the ladies hit back, and oh boy what a satisfying experience for the audience to see the victims turn the heat around. That's where Death Proof succeeds. That very moment, where the audience sits on the edge of their seats, feeling with the ladies and wanting Stuntman Mike as much dead as they want, and if only for the fact that he killed the characters we loved so much during the first half of the movie.

Death Proof is Quentin Tarantino's hommage to car chase flicks, slasher movies and other drive-in theater galore. If you read through our impressive movie references guide, you'll see where a lot of the things are coming from and you'll find that just like QT's other movies, Death Proof is meant to be a time machine. Especially for younger audiences, who've only seen “that Angelina Jolie bullshit”, Death Proof is the door to discovering a line of really great camp classics that make for a great double feature late night entertainment on DVD with a few friends. Death Proof is the kind of movie where you can relax and kick back and enjoy the show (in that sense, the audience is just like Rosario Dawson's character: eyes wide open, excited like a little kid and thrilled by what's happening on screen. And it's not her who can't believe that their Charger just ran through a boat, it's very much the audience's words in her mouth), and since it stands alone in this version, you can let your mind wander and let the movie do its magic. A great chick flick (oh yes, women love this movie), lots of cars and some deadly killer dude hunting after a foxy posse. What more could you ask for?

Death Proof will go down as the little drive-in flick QT made for Grindhouse, and it will gain its fans for both versions. But it will also go down as the movie that brought Kurt Russell back as one maniac killer, and the movie with one of the most daring car chases in years. It has an impressive cast, great music and it does what a good movie should do, and it does it best: It is entertaining without being hollywood popcorn mainstream assembly line stuff. Enjoy Death Proof, two thumbs up!