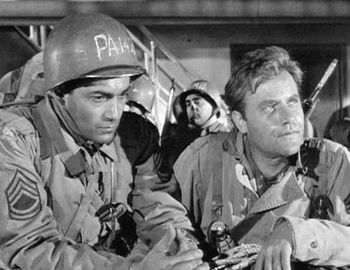 Combat! was an American television program that originally aired on ABC from 1962 until 1967. The exclamation point in Combat! was depicted on-screen as a stylized bayonet. The show covered the lives of a squad of American soldiers fighting the Germans in France during World War II. The show starred Rick Jason as platoon leader Second Lieutenant Gil Hanley and Vic Morrow as Sergeant "Chip" Saunders. The series was unusual in that Jason and Morrow would play the lead in alternating episodes.