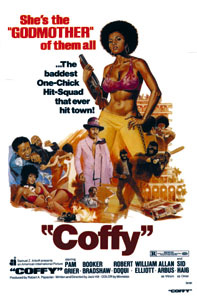 Pam Grier is COFFY, a sexy nurse who goes on a Roaring Rampage of Revenge to get back at the drug dealers who got her sister hooked on heroin. I know I know, the premise is very simple, BUT Pam Grier's vengeful personality mixed with her natural sexiness drives this movie over the top! She goes incognito as a trashy hooker to get the two dealers who sold heroin to her little sister. In a timely fashion, Coffy lures them with her sexy voluptuous body and they take her back to their apartment. Once they are into the lovin' mood, Coffy whips out a sawed off shotgun and blows one of the pimps heads off, Exploitation Style! Then she takes care of the other dude by shooting him up with a lethal dose of heroin.

Coffy tracks down everyone involved with the drug pushers who did her sister wrong. In one great scene, Coffy confronts a junkie girl who buys smack from the drug dealers and she proceeds to get her to talk. That is, until the junkie's lesbian girlfriend comes home. The butch lesbian gets the idea that Coffy is having an affair with her lover, so she goes buckwild on Coffy and they proceed to destroy the house in a fight, but Coffy manages to make it out of there in one piece.

Coffys not satisfied with that. She wants to find out who the big man is behind the drug dealers around her hood. So she finds out one of the main dealer's contacts is a pimp named King George (Robert Doqui). King George is a pimpin prince (check out the cartoony pimp suit he wears in this, he makes Dolemite look tame!) Coffy goes undercover as a prositute to infiltrate his organization and take out his entourage. One of King George's top clients is a crime kingpin named Vitroni. Coffy is hired by Vitroni for a night of lovin, but Coffy's ready with a little surprise. Vitroni orders her to "Crawl you black bitch", Coffy whips out a gun and tries to shoot him but shes stopped. Vitroni sees this as an assassination attempt by King George and the next day Vitroni's thugs take King George for a little ride. They tie him to the back of the car and drag him. This has to be the best "man dragged behind car" sequences ever. Its simply outrageous and funny! King George gets dragged around like a ragdoll. Later on, Coffy and one of King George's prostitutes (whos jealous of Coffy) have one of the best onscreen catfights of all time. Coffy puts razor blades in her fake afro before the fight, and when the white hooker goes to grab her head theres blood everywhere!

This is probably Jack Hill's most famous film and he again manages to weave a great Exploitation story with cool characters and depth. Watch for an appearance by Hill regular Sid Haig as one of Vitroni's thugs. This film is the definition of Exploitation Cinema. It has everything, especially the over the top-cartoonish violence that just gets your adrenaline going.