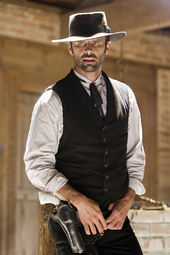 Billy Crash is a character in Django Unchained played by Walton Goggins (Justified). The character is one of Calvin Candie's slave trainers in the movie.

The character evolved during the shooting of the movie and was merged with another named Ace Woody, who was to be played by Kevin Costner, then Kurt Russell.