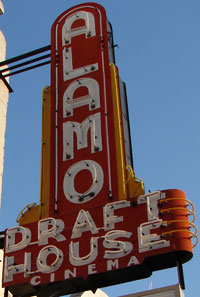 Quentin Tarantino returns to Austin, Texas for The Best of QT Fest, where he will present a range of films from his personal collection. The Quentin Tarantino Archives has sent a few spies down to Austin (well actually they wen't on their own and I am sitting here all alone, poor me) to cover the festival and here I'll just sum up a little what they experience and I have some pictures that our dear man Blake provided from the day before it started. To repeat what some might have not yet digested good enough: this is not QT7, this is the seventh Tarantino Film Fest but it is a best of, showing films that were screened in the past already. 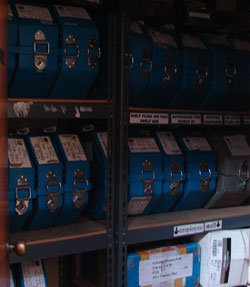 The first two films where Kiss the Girls and make them die, and a rare uncut print of Snake in the Monkey's Shadow. Tarantino is joined by a few friends, among them Robert Rodriguez and the RZA. He's doing introductions for both films, but as a special gimmick lots of trailers are shown, among them Danger Diabolik and Dr Zhivago, Sister Streetfighter and Pulp Fiction. The two films are favorites of Tarantino, the first a James Bond type film and the second one of the best Kung Fu films. According to witnesses it was a hillarious night and a great opening day for the Fest. There were posters, stills and lobby cards up for exhibition in the building and lots of movie geek air around the place. Please everyone, a minute of silence and mourning for everyone who can't be in Austin right now. Thanks.

We will continue to report from the festival, relying on coverage provided mostly by Blake and Micah, of cinemastrikesback.com and dumbdistraction.com respectively. Tomorrow will be an outdoors screening and I am sure we'll have lots of pictures and reviews coming up. Please visit the links to our partner sites here and check out their reviews, reports and pictures of the Fest that I won't bother stealing just from them.